It has been established that during operation of the Closed Oxygen Cycle (COC) on constant voltage polarization, the cell reaches a state where the reactions of the two electrodes get into self-accelerating interrelation. Both cell current and temperature begin to increase spontaneously and pass through a maximum before reaching stationary values. This phenomenon is called thermal run away (TRA). The processes that initiate thermal phenomena and may cause thermal runaway that could lead to failure of VRLA batteries have been investigated in our laboratory. Through following the changes in U, I, T, j-, j+, Vgas (H2) of VRLA cells polarized at high voltages a model for the processes causing TRA has been proposed.

Stages of thermal runaway phenomena. Progress of TRA could be divided in four different stages. 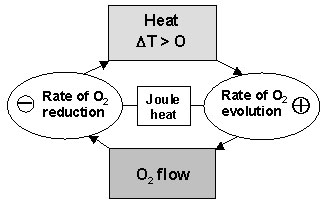 To avoid the appearance of TRA phenomena, an AGM separator with appropriate physico-chemical properties should be selected, the current and voltage should be kept below certain critical values.