A new modified AGM (MAGM) separator for VRLA batteries, and the respective technology for its production, have been developed. The new product is obtained by processing absorptive glass mat (AGM) separator with polymer emulsion, which is adsorbed onto the surface of the glass fibres and concentrates at the sites of contact between the fibres. Thus, a continuous porous network of interconnected glass fibres is formed. The two surfaces of the AGM sheet are treated with polymer emulsion of different concentration in view of the different processes that take place at the positive and the negative plates, respectively. As a result of the above treatment the surface properties of the AGM are modified to balance hydrophobic/hydrophilic properties. Physico-chemical properties such tensile strength, H2SO4 absorption, wicking rate, chemical and thermal stability are compared for the two types of separators. 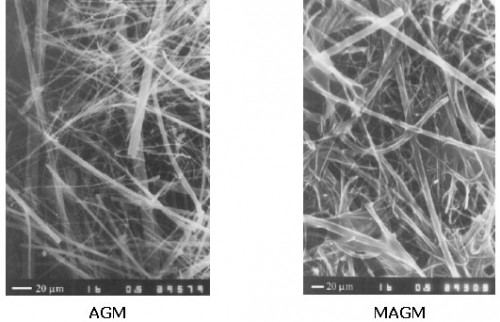 Horizontal electrolyte stratification is a result of the different processes that occur at the two types of plates as well as of the resistance that the ion flows of H2SO4 and H2O have to overcome when passing through the separator. In VRLA batteries, their movement is impeded by the AGM separator, which reduces the available capacity of the battery. The effect of the MAGM separator on the concentration of H2SO4 at the two separator interfaces during charge, discharge, open circuit and on cycling is investigated. MAGM eliminates the H2SO4 concentration differences between the two types of plates. These effects of the MAGM separator result in an increase of the available capacity of the battery on cycling and on float service, which leads to a substantial increase in VRLA battery life. MAGM improves the efficiency of the oxygen cycle and thus reduces water loss and prevents the occurrence of thermal runaway phenomena in the cells.

V. Naidenov, A new modified AGM separator and its influence on processes that take place during operation of VRLA batteries