Microstructure, chemical and electrochemical properties of PbO2 in the positive active mass

A heterogeneous mass distribution is observed in the bulk of PbO2 particles (Fig.2). 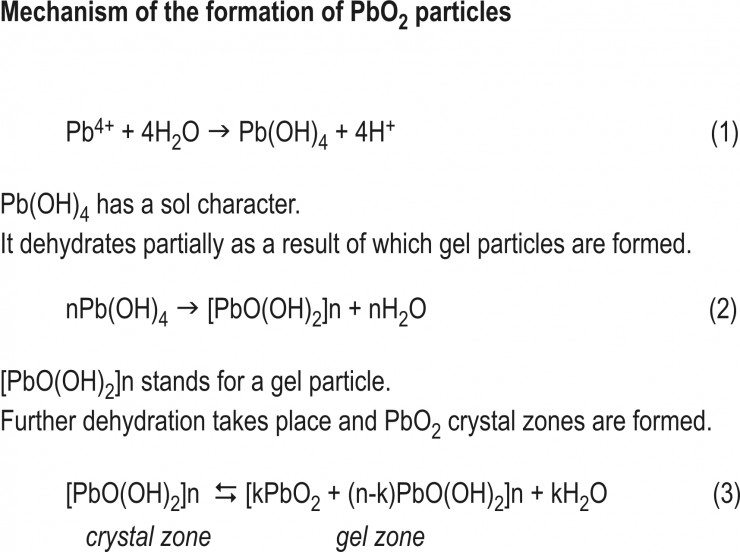 Hydrated zones exchange ions with the solution (PbO2 particle is an open system). The ratio between crystal and gel zones influences the capacity of the plate.

The processes that occur at the interfaces particle/solution and crystal zones/gel zones are almost reversible and relatively fast. These phenomena allow electrochemical reactions with low polarization to proceed in the bulk of agglomerates during discharge of positive plates. Crystal PbO2 is a degenerated n-type semi-conductor, which is responsible for the high electron conductivity of PAM. Amorphous gel zones can be represented as built of linear polymer hydrated chains. They determine the proton and electron conductivity of PAM. 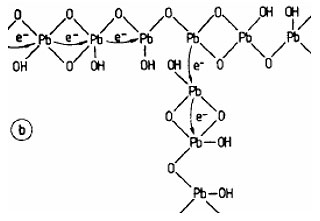 An “island – bridge” mechanism of electron movement between crystal and gel zones is proposed.

Electrochemical activity of PbO2 particles. The concurrent existence of crystal and gel zones in the agglomerates determine the electrochemical activity of lead-acid battery positive plates. In view of the gel-crystal structure of PAM this activity should be influenced by the ratio between crystal and gel zones, the density of PAM and the amount and type of dopands used. It has been found that the phase composition of PAM depends on pH of the solution since the hydrated parts of PbO2 particles interact with ions in the solution as a result of which the crystal zones/hydrated zones and hydrated zones/solution equilibriums change. Since solution pH influences the phase composition of PAM it affects the electrochemical performance of PbO2 . The effect of H2SO4 concentration on the mechanisms of the processes of reduction of PbO2 and oxidation of the formed PbSO4 has been elucidated and three concentration regions have been identified. The phase composition and crystal morphology of corrosion layer and PAM have been examined.