Oxygen reduction at the negative plates

The LABD team has performed fundamental investigations into the mechanism of reactions and elementary processes involved in the closed oxygen cycle in VRLAB. The influence of temperature and active block saturation with electrolyte has been determined based on a newly proposed model for the reactions of oxygen reduction. 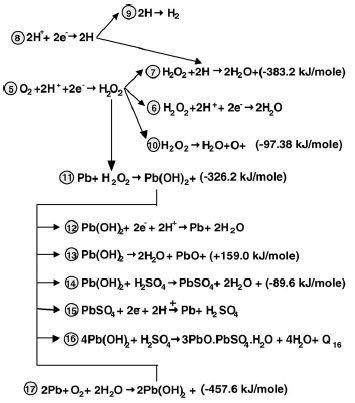 Elementary processes of electrochemical reduction of O2  It is assumed that oxygen diffusion through the thin liquid film (TLF) covering NAM and impeded charge transfer through the electric double layer are the rate limiting steps of the closed oxygen cycle (COC).  A model for the oxygen recombination kinetics in VRLAB is proposed, which accounts for the processes that take place in the TLF covering the surface of NAM. 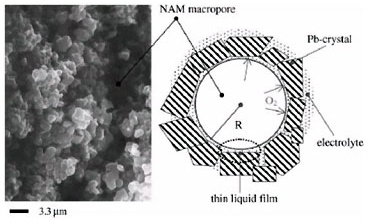 By employing the DLVO theory of colloid systems the thickness of TLF and its influence on COC has been estimated. A general equation has beens obtained for the relation between oxygen recombination rate and TLF properties, NAM structure and polarization time. Experimental methods have been developed in LABD for determining both the current of electrochemical reduction of oxygen and the current of oxygen cycle by measuring the gas flow leaving the cell during overcharge. The validity of the equation has been experimentally confirmed for different electrolyte saturation levels of plates, active block compressions and additives to NAM.