With introduction of VRLA batteries the volume of electrolyte in the battery was reduced. To compensate for the reduced amount of H2SO4 in the cells, its concentration was increased from 1.28 to 1.31–1.34 relative density. This technological change was made ignoring the effect of acid concentration on the electrochemical activity of PAM, which might be the reason for the dramatic decrease in VRLAB cycle life. Investigations into the influence of acid concentration on battery performance have been carried out at LABD. 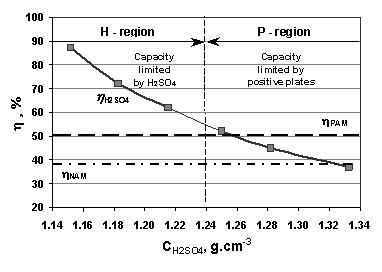 Battery characteristics. To investigate the influence of H2SO4 on battery capacity and cycle life performance six types of 12V/32 Ah flooded batteries have been manufactured and tested at our Department. The observed experimental data can be summarized as follow: