One of the major research targets of our Department is to diclose the phenomena that occur during operation of VRLA batteries. When the lead-antimony grids in lead-acid batteries were substituted by lead-calcium ones battery cycle life was dramatically shortened. This phenomenon was called first “antimony-free effect” and later “premature capacity loss” (PCL).

Parameters and conditions influencing PCL. Reviewing the abundant literature data D. Pavlov has summarized the basic parameters that exert the strongest influence on PLC as follows:

Amount and concentration of H2SO4

Modes of charge and discharge

No stack pressure in the cell

Corrosion layer. It has been established that CL comprises two sublayers: a dense (inner) and a porous (outer) sublayer. The inner layer is composed of PbO1.2 and the outer layer of PbO1.8 lead oxides, which results in different conductivities of the sublayers. The gel-crystal approach is applied to describe corrosion layer properties. According to the above-mentioned properties of the hydrated gel zones the “bridges-islands” mechanism of electron transfer is proposed. The composition and structure of the CL depend on the rate of the reactions that take place at the grid and on grid alloy composition. Alloying additives could affect CL conductivity in two ways. First, they can act as electrocatalysts or inhibitors of the reactions in the CL and thus change its stoichiometric coefficient. The second mode is to altering the semi-conductor properties of the oxides in CL - formation of mixed oxides. The effect of Sb, Sn, As, Bi on the structure and properties of CL and its influence on PCL has been investigated in our laboratory. 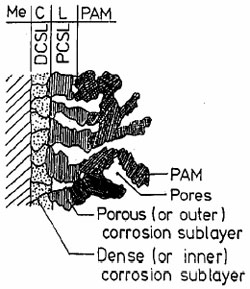 A new theoretical approach to the grid/PAM interface is proposed. It assumes that the interface between grid and PAM has the following structure: grid/CL/AMCL/PAM, where AMCL means Active Mass Collecting Layer. The main function of AMCL is to collect current generated by PAM. The structure, composition and conductivity of AMCL have been reviewed. Clear experimental verification of the proposed theory has been searched.

Methods for suppressing PCL effect. On grounds of the theoretical and experimental data obtained from the fundamental investigations methods have been proposed to prevent failure caused by PCL. D. Pavlov has suggested methods for suppressing the PCL phenomena. These methods can be divided in two groups, the first group being related to the production technology and the second group to cell design parameters.

Select appropriate additives to grid alloys (Sb, Sn) that would interconnect the polymer chains of gel zones of PAM in a network with high conductivity.

Restrict plate pulsation to about 10-15% during charge–discharge cycling