The overall reactions of discharge and charge can be represented by the following equation:

These are the final products of the reactions. The mechanism of the elementary reactions and processes depends on the structure of PAM, the pH of the pore solution and the ion transport through the pores. It involves the formation of a number of intermediate products.

Processes during discharge. It has been found through micro-diffraction analysis that parallel to PbSO4 orthorhombic PbO is also formed during discharge of the positive plate [1]. The discharge reaction proceeds in the hydrated gel zones of a certain number of PbO2 particles and aggregates (active centres). A scheme of the reactions that proceed in the active centres is presented in Fig. 1. 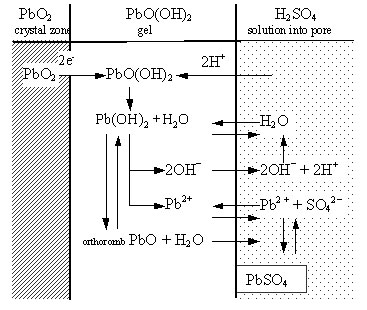 Electrons pass from the crystal zones (PbO2) into the gel zones and H+ ions from the solution in the pores enter these gel zones (to preserve electroneutrality), whereby PbO(OH)2 is reduced to Pb(OH)2. When a given gel zone is in contact with H2SO4 solution, a reaction of PbSO4 formation proceeds. In the aggregates interior access of H2SO4 to the micropores is impeded and Pb(OH)2 is partially dehydrated to orthorhomb-PbO [1-3]. Gel zones are in equilibrium with crystal zones and with ions in the solution. A reaction of hydration PbO2 + H2O → PbO(OH)2 proceeds, which supports the existence of the gel zones and thus the discharge reaction until the whole PbO2 particle or agglomerate is reduced. On further discharge and on open circuit Pb2+ ions released by Pb(OH)2 diffuse from the micropores in the aggregates’ interior to the solution in the macropores. These ions contribute to the formation and growth of PbSO4 crystals in the macropores [4, 5]. The latter process has been confirmed also by measuring the changes in PAM real density and total pore volume during discharge [6]. The density of the phases formed during discharge is higher than the value corresponding to the amount of PbSO4 as calculated using equation (1) and Faraday’s law. This is related to the formation of PbO. Only after a 16-hour stay on open circuit does the PAM density decrease, due to sulfation of PbO, to a value corresponding to the calculated PbSO4 quantity according to Faraday equation [6,7]. After that PbSO4 recrystallizes into larger crystals. The driving forces of PbSO4 recrystallization have been disclosed [8]. As a result of this process the positive active mass shrinks [9]. It has been established that at the beginning of cycling the plate capacity depends on the volume of transport pores and less so on the BET surface of PAM [9].

Processes during charge. The elementary reactions that proceed during plate charge are presented schematically in Fig. 2. 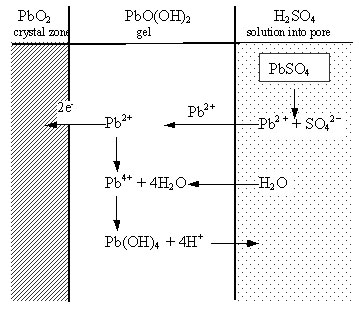 Dehydration of the particles continues until crystal zones are formed in the volume of particles and agglomerates.

An equilibrium is established between crystal and gel zones [4] on the one hand, and between gel zones and the solution in the pores, on the other hand [12, 5]. The above processes occur at certain sites (active centres) in PAM, where the gel has a definite concentration and stoichiometry.

The charge and discharge processes on cycling cause changes in the structure of PAM. The molar volume of PbSO4 is larger than that of PbO2 . That is why the discharged plate is thicker than the charged one. On plate cycling, the PAM pulsates (“breathing”), increasing its volume and weight on discharge and decreasing (both in volume and weight) on charge [9]. As certain active centres in PAM are involved in the discharge processes and others in the charge reactions, the structure of PAM changes. This may lead to impaired contacts between the individual aggregates and agglomerates in PAM, and between PAM and the grid. As a result of this the capacity declines. It has been found that alloying additives such as Sb, As and Bi slow down the process of disintegration of PbO2 aggregates and thus support the integrity of the PAM skeleton, as a result of which the cycle life of the positive plates improves.