One of the processes that take place during battery operation is corrosion of the spines (grids) of positive battery plates, which affects battery performance. Fundamental investigations have been conducted and experimental methods have been developed at Lead-Acid Battery Department aimed to study this process.

Theoretical considerations. The positive plate as electrode system can be represented as follows:

The obtained experimental data is interpreted in the light of the oxygen model. This model allows revealing the effect of Sb on corrosion rate and phase composition of CL. The elementary reactions and their localization are studied. The plate structure and the reactions that proceed can be represented schematically as follows: 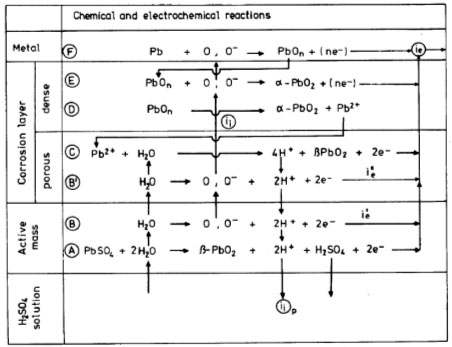 The obtained experimental results are in good agreement with theoretical concepts and provide practical information for improving the characteristics of tubular batteries.