In the eve of the first LABAT conference, on the initiative of the Organizing Committee of the conference, the Board of the Bulgarian Academy of Sciences established – The Gaston Planté medal named after the inventor of the lead-acid battery.

On a special ceremony of each LABAT conference the Gaston Planté medal is awarded to a prominent scientist for his significant contribution to the lead-acid battery science and technology. The selection is made on a two-step procedure. First, all members of International Advisory Committee send their rating of the three most distinguished scientists who should compete for this award. Second, the Nominating Planté Medal Committee summarizes all proposals, nominates the three highest ranked candidates for this award and raises the winner by secret voting.

Four scientists (out of a total of 29 prominent battery experts proposed) have been ranked highest by the members of the two international committees of LABAT'2021. As there were two third-ranked candidates with equal number of rating points, both of them were nominated. The four nominees (in alphabetical order of their surnames) for the 2021 Gaston Planté Medal were:

Dr. Herbert Giess received the greatest number of votes and become the winner of the most respected accolade in the lead-acid battery industry - 2021 Gaston Planté Medal. 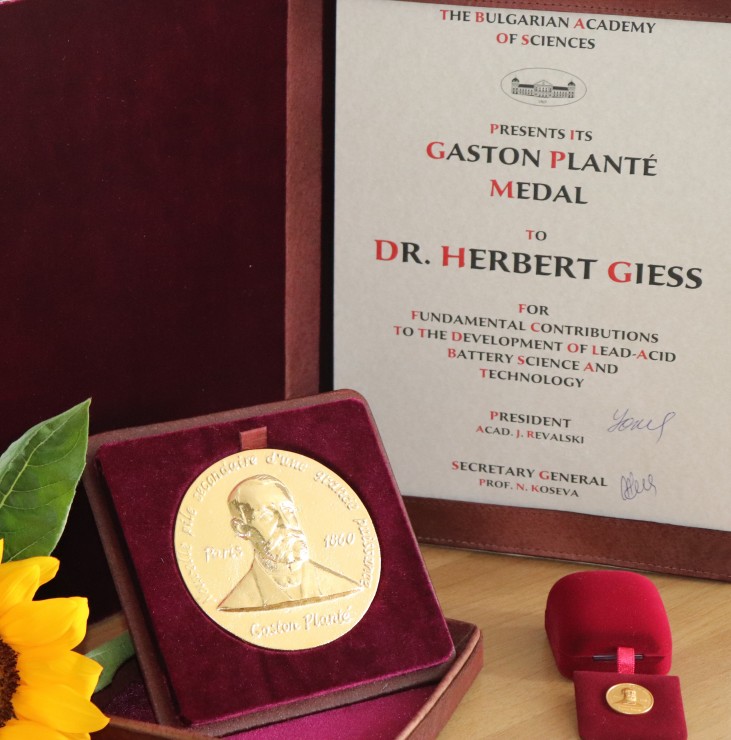 Dr. Herbert Giess was born in 1945 in the small German speaking village Jenesien in the South Tirol region of Italy and has worked for over 30 years for various research centers and companies in Italy, France, Switzerland, China and other countries. He has numerous fundamental contributions to the development of lead-acid battery science and technology the most important of which include: study of the effect of tin in the lead alloys for positive battery plates and its mitigating action in preventing the passivation of the grids after deep discharge as well as determining its minimum content in the alloy; elucidation of the so called “antimony-free effect” responsible for premature capacity loss of the batteries; Qualification of 2V VRLA/AGM cells for back-up power in Nuclear Power plants; Co-development with the Institute of Electrochemistry and Energy Systems at the Bulgarian Academy of Sciences of selenium containing alloys for the prevention of negative strap corrosion in VRLA/AGM cells; Development of VRLA/AGM cells with > 3000x C10 capacity throughput capability for energy systems applications resulting in the capture a predominant market share in China. Managing the development of essential International Lead Acid Battery Standards for Stationary Power Back-up, Energy Storage Systems and Lightweight vehicles.

GASTON PLANTÉ MEDALLISTS UP TO NOW