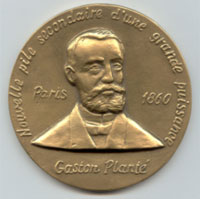 In the eve of the first LABAT conference, on the initiative of the Organizing Committee of the conference, the Board of the Bulgarian Academy of Sciences established – The Gaston Planté medal named after the inventor of the lead-acid battery.

On a special ceremony of each LABAT conference the Gaston Planté medal is awarded to a prominent scientist for his significant contribution to the lead-acid battery science and technology. The selection is made on a two-step procedure. First, all members of International Advisory committee send their rating of the three most distinguished scientists who should compete for this award. Second, the Nominating Planté Medal Committee summarizes all proposals, nominates the three highest ranked candidates for this award and raises the winner.

Four scientists (out of a total of 23 prominent battery experts proposed) have been ranked highest by the members of the two international committees of LABAT'2017. As there were two third-ranked candidates with equal number of rating points, both of them were nominated. The four nominees for the 2017 Gaston Planté Medal were:

Dr. Geno Papazov and Dr. Jun Furukawa received the greatest number of votes and become joint winners of the most respected accolade in the lead-acid battery industry - 2017 Gaston Planté Medal.

Up to now the Gaston Planté medal is awarded to: